We need to begin Gospel Reading with the essential background. That means a brief introduction as to how and why the four Gospels came to be written. This will help us to make sure that we are asking the right questions as we the Gospels.
At this stage, we need to look at what led up to the Gospel. What leads on from them, how the four and only these four became the recognised Gospels of the New Testament, is another question. All I need say is that the special canonical status of these four was generally recognised by the end of the second century.

The four written Gospels we now have can best be seen as the result of a three stage process of development:

It is easiest to see these three stages as an outline story of the early Church.

It is easiest to see Mark as the first Gospel to be written because Mark's story of Jesus was used by Matthew and Luke as a framework for their gospels. These two evangelists took over Mark's story but they then adapted this story in different ways. Thus Matthew added five major discourses to the story whilst Luke has Jesus making a lengthy journey to Jerusalem. These adapations bring out each evangelist's portrait of Jesus.

The Gospels, Four Portraits of Jesus

I like to think of the Gospels of Jesus as four portraits. In painting someone, an artist is giving us his understanding and interpretation of the person he is painting. This is why different portraits of the same person can be quite different. In the same way, the Gospel is a portrait of Jesus: we are fortunate to have four portraits giving us four different approaches to this unique man whom we believe to be the Son of God. 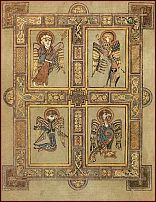 The Four Evangelists (The Book of Kells)